On 30 March, the federal governments attempt to change Section18C of the anti-discrimination act was been rejected by the Australian Senate and for now this much discussed topic has taken a back seat.

For those, who were supporting the changes it was a matter of restrictions on free speech and for the ones opposing, changes reflected the legalisation of bigotry, hate speech and discrimination in Australia. 18C changes were, one of the hotly debated pieces of legislation in recent years.

Most of the recent migrants are unaware of 18C and its broader implication to Australian way of life and hence it will be worthwhile to discuss the origin briefly. 18C was introduced way back in 1975 and can be seen as an act which eliminated the last remnant of highly controversial “white Australia policy” and paved the way towards a more inclusive multicultural Australia.

This act in a way also ensured that first Australians are not being discriminated against. Racial discrimination commissioner described the act as below while speaking to NITV, back in 2015.

In a nutshell 18C is an integral part of Australian Way of life and vision of multi-cultural Australia.

People gunning for changes in 18C, based there argument on generic nature of the terminologies used in the language of section 18C. For example, those who oppose 18C (most notably Alan Bolt) have issue with use of words like “offend, insult, humiliate” which, they argue, is subjective and non-discreet in nature and can be misused by people against fair criticism and block free speech and freedom of press. Nothing can be further from truth that this. What these people do not tell you is that section 18C is accompanied by section 18D , Which is there to check the misuse of section 18C.

The historic data also do not support the extremely exaggerated claims misuse of 18C as less than five per cent of claims that were made under the Racial Discrimination Act made it to the courts. Majority of those five percent were eventually dismissed by the courts.

Therefore, it can be safely assumed that there is no immediate or imminent threat to “freedom of speech” in Australia due to existence of 18C. It was more of a political gimmick to satisfy the right wing voters than a real issue and thankfully the changes were blocked by the senate.

Although I am a big supporter of status quo of Racial Discrimination Act in general and 18C in particular, there is still a space of introspection for citizens and residents of this country who supported the status quo.

In the age of social media and Facebook LIVE it’s really easy to record a video, play judge and jury and tag someone racist. A drunk person abusing you on the train is not necessarily racist he/she might have abused a white person had they been there at that moment.

An old white individual is not necessarily racist when they tell you mind the volume while you are talking on the phone, not every altercation a white person is having with an ethnic minority is racially provoked, the acts may be unlawful according to other acts but bundling everything as racist is unfortunate and leadership of ethnic groups must ensure proper awareness, there are numerous such incidents where the madness of social media and age of going viral has made a victim out of a supposed “racist person”.

These unfortunate instants of name and shame on social media, incorrect tagging of individuals as racist leads to swell in ground support for extreme right wing politicians and personalities.

Now that 18C remains intact, let’s work together to ensure that there is awareness across the larger community in understanding what incidents can and what can’t be reported under “Racial Discrimination Act of Australia.” 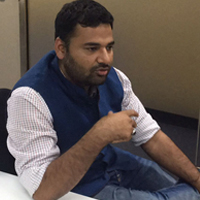 A Sydney based IT Consultant, Saif currently works for Westpac bank. An electronic engineer by qualification, Saif loves to read. Saif has a keen interest in politics and current affairs (both global and domestic) and is quite active on social networks such as Quora and FB in his personal capacity. Saif has been participating in public speaking and debates since he was in year 6. He is well versed with English, Hindi and Urdu languages both written and spoken forms, can understand Punjabi