The Spirit of sacrifice in Islam

The last month and the first month of Islamic calendar symbolise the spirit of sacrifice in Islam. These two consecutive months relate to two great stories of sacrifice, first one symbolising sacrifice of human worldly desires for the Supreme Lord while the second one relates to fight against oppression and injustice.

Eid Al Adha is celebrated to remember the sacrifice by Prophet Ibrahim, the patriarchal figure of the three major world religions, i.e. Islam, Christianity and Judaism, which are known as Abrahamic faiths.

The great prophet is distinguished in the Qur'an with the title of khalil-ul-Allah: the intimate friend, "For Allah did take Ibrahim for (an intimate) friend " (Holy Quran 4:125) and a great model: "Ibrahim was indeed a model. Devoutly obedient to Allah, and true in faith, and he joined no gods with Allah " (16:20). Prophet Ibrahim, born to an idol Maker among the idol-worshipping people, engaged in lifelong struggle of spreading monotheism. He stood against ignorance and prejudice in belief and faith. He had no children and as he became old, his desire to have a son grew stronger. His wife Sarah was barren, yet he pleaded "O my Lord! Grant me a righteous son!" (37:100). Allah answered his prayer "So we gave him the good news of a forbearing boy" (37:101).

How much would he have loved Ismail, the son, is hard to imagine. He was the promise of his future generations. Yet the old prophet, whose life long sacrifices, devotion to his God was beyond any doubt, was to be tested again. He was commanded by Allah (swt) to sacrifice his only son, in his dream for three consecutive nights. He was given the choice between the commandment of his God and extreme love for the only son who was born in old age, between his faith and emotion and between spiritual consciousness and human instinct. The great prophet chose his God.

The noble son Ismail, the future prophet, was no less forthcoming in his belief of Allah. Ibrahim said to Ismail : "O my Son, I see in a dream that I offer you in sacrifice. Now see what is your view ? " "O my father! Do as you are commanded. You will find me, if Allah so wills, patient and constant " (37:102), was the answer.

As Ibrahim took Ismail to the place of sacrifice in Mina, near Mecca, the devil lured them into mischief, but the great prophets had firm faith, unparalleled in human history. They submitted to Allah's will. The choice of Ibrahim was sacrifice, that of Ismail was self-sacrifice: Martyrdom.

As Ismail was laid to ground by the old father and as he attempted to slaughter him with a sharp knife, the knife did not cut. A sheep was sent from heaven for slaughter, instead. The message from Allah "O Ibrahim! You have confirmed the dream, Thus indeed do We reward those who do right. This is indeed the manifest trial!" (37:104-105) gave Ibrahim the testimony whose generations will be rewarded with prophethood. The God of Ibrahim, the lord of the universe, was not thirsty for human blood like the gods of pagans. The concept of Human sacrifice to please God, present in most of the Pagan customs, was abolished forever amongst peoples of the book.

The great story of Prophet Ibrahim is mentioned not only in Quran but also in Hebrew Bible (Torah) and Christian sacred books. Eid ulAdha, remembering the great sacrifice of prophet Ibrahim is celebrated during the last month of Islamic calendar. The following month of Muharram, the first month of Islamic calendar marks another historical event of martyrdom and sacrifice to fight oppression and injustice. It relates to Imam Hussain, the grandson of the holy prophet Muhammad (PBUH).

Imam Hussain, son of Ali Ibn Abi Talib, the first Imam as per Shia theology and the fourth Caliph as per Sunni belief, was a great revolutionary leader of 6Th century. He was known for his integrity in faith and for his devotion to follow the great principles of his grandfather in establishing a just society. Islamic empire had spread rapidly within decades of the passing away of the holy prophet. However, following the end of khilafat and death of Imam Ali, the leadership of the vast Islamic Empire had fallen into corrupt hands. The ruler at the time, Yazid, from the Ummayad dynasty violated the great principles of Islam, devoid his people of human dignity and indulged in luxury and corruption. Yet, he demanded that Imam Hussain pay him allegiance to lend credibility to his own rule.

Imam Hussain was challenged and asked for allegiance to a tyrant which meant allowing oppression of his people and deterioration of his faith, established by his grandfather. The holy prophet had said “The greatest stand is to speak the word of truth in the face of a tyrant.”

Imam Hussain opted to take a stand against Yazid. His life was threatened by mercenaries of Yazid in Makkah. He received promises of support from Kufah in Iraq. Along with his family and companions, Imam Hussain embarked on a journey towards the East seeking to gain popular support and avoid any violence. HoweverYazid sent an army of 30,000 to confront them at Karbala during peak of summer. The small group of 72 Hussain loyalists and their families were surrounded. The stories of torture of the most pious women, men and children are being described graphically during commemorations of great martyrdom each year by millions of Muslims around the world. Not only numerous family members of the holy prophet and companions , including little children, were killed with extreme brutality, Imam Hussain himself was eventually martyred. While all Muslims regard martyrdom of Hussain a significant event of Islamic calendar, Shias consider it the most important chapter of Islamic history and drive from it the philosophy and divinity of Islam.

Imam Hussain’s legacy continues to inspire. His martyrdom had become the catalyst for revolution at the time which led to the collapse of Yazid’styrannic rule. The historian Edward Gibbon wrote “In a distant age and climate, the tragic scene of the death of Hussain will awaken the sympathy of the coldest reader.” Mahatma Gandhi told his disciples : “The human being can achieve survival by following the Hussaini principles”. In the words of famous historian Thomas Carlyle “The best lesson which we get from the tragedy of Karbala is that Hussain and his companions were the rigid believers of God. They illustrated that numerical superiority does not count when it comes to truth and falsehood. The victory of Hussain despite his minority marvels me!”. The legendary Urdu poet Allama Iqbal says, “Imam Hussain uprooted despotism forever till the Day of Resurrection. He watered the dry garden of freedom with the surging wave of his blood, and indeed he awakened the sleeping Muslim nation. If Imam Hussain had aimed at acquiring a worldly empire, he would not have travelled the way he did (from Makkah to Karbala). Hussain weltered in blood and dust for the sake of truth. Verily he, therefore, became the bed-rock (foundation) of the Muslim creed; La ilahailla Allah (There is no god but Allah).”

The two great stories of sacrifice in Islamic faith teach great lessons to humanity in today’s world. Muslims seem to have lost the character which is needed to fight the oppression of Muslim societies in many parts of the world. Instead of standing firm in Islamic faith and principles, they engage in falsehood and extremism, wrongly interpreting the Quranic verses. Let us hope that the right people will emerge among Muslims and non-Muslims to fight the ideological wars against the forces of evil who have engulfed today’s world into suffering and misery. 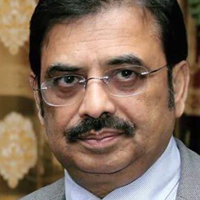 Zahid Jamil, a Gold medal awardee of Institution of Engineers, India, has studied engineering at renowned Indian Institute of Technology (IITs). Managing a financial planning practice based in Sydney for over 20 years. He has been a passionate writer on various internet forums and in community and national newspapers for past several years. He also spoke regularly on Sydney's community radios and on Australian talk back radios. He heads South Asian Muslim Association of Australia, SAMAA, a benevolent institution offering wide range of services to the community elders. He also moderates an Islamic website "Islamic Forum for Education and Research